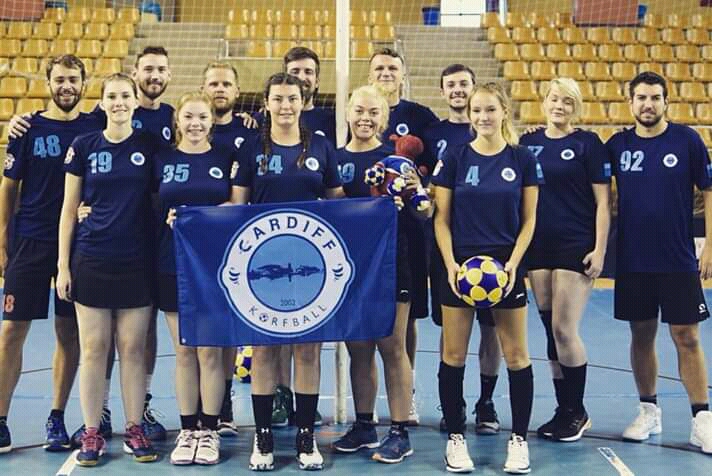 Cardiff City & Met Cyclones’ second match of the season saw the team travelling across the bridge to distant Farnborough! Their first away match of the season was always going to be a tough one. Farnborough Jets were equal on points with both Cyclones and Oxford at the end of last season, beaten in the League standings only on goal difference, they are sure to be one of the contenders for the Regional League Crown this season.

In what proved to be an extremely close match, Cyclones found themselves slipping behind at regular intervals. Farnborough’s playing style stretched the Cyclones’ defence, utilising lots of side feeds to create space on the court. When Cardiff’s front defence tightened in a bid to counter, the Farnborough sharpshooters Charlie Saunders and Simon Pavey began to rack up impressive tallies of goals, finishing on seven and five respectively. Cardiff responded through a concerted team effort, with a spread of goals across the team, led by Captain James Wilcox who took five of his own.

Under the relentless pace set by the Jets, Cardiff began to bend. Some timely substitutions saw Tom Coleman and Naomi Wrigley (her debut something of a baptism of fire in a very tight match) brought on deep in the first half. Coleman’s experience under pressure helped steady the division and saw a flurry of goals from the Welsh, which brought the scores level minutes from half time. Frustratingly for Cardiff, yet another longshot dropped just before the whistle, handing the momentum back to Farnborough at the end of the half.

In the second half the Cyclones boys tightened their defence, so Farnborough turned to their girls to increase the lead. Jess Turner sank four goals, her speed and agility causing headaches for her defenders and Daisy Marino, putting in a well-deserved MVP performance, came away with her first two goals of the season.

Down the other end Alice Hunter dominated, guiding her division through sheer willpower. She put away five expertly finished goals and led a determined battle to close the gap on Farnborough. The Welsh Champions fell behind by two or three goals repeatedly, yet again and again pulled the score level. The slog continued into the dying minutes of the game and some of the players started to lose count of the score so it came as a surprise to both sides when the result was revealed to be a draw at 21-21!

A hard won point away from home for Cardiff Cyclones sets them in good stead for the return fixture, but sees them drop to third in the League table after Oxford City’s victory over Bristol Thunder 2.